On January 21, 2017, the school band ‘Achtsam’ made a successful appearance in a professional atmosphere at BandClash. The Saxon Ministry of Education had invited eight school bands to the regional finals of East Saxony in Dresden.

The “TanteJU” offered a somewhat informal background. The order of the appearance of the bands was drawn. ‘Achtsam’ performed as the eighth and last band of the evening. At the beginning, rock bands from Dresden heated up the mood. They had brought along a lot of fans from the city who fully supported them. Then the time came for Lenka, Paul, Helge, Alina, Theo, Julia, Sebastian and Roswitha and their own compositions. 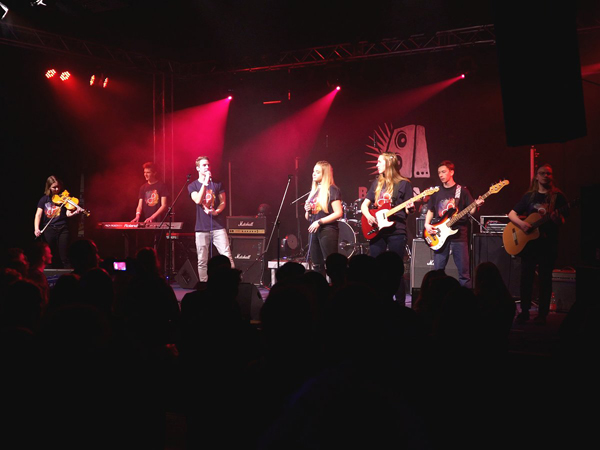 ‘Achtsam’ began their performance with “Photo albums”. The song is about the sad ending of a relationship. Lenka sang the Czech song “Na mé cestÄ• na mÄ•síc“, which deals with the “way to the moon” and what it would be like. This was followed by the new FSG-anthem “Divine Spark”, whose lyrics had been assembled from parts of Friedrich Schiller’s works by Dr. Sperfeld. The love ballad “You Are Perfect To Me“ challenged Helge and Alina as singers. Surely everyone would like to live a “Chilled out life” whose lyrics invite people to dream about what could be possible. “Away from here” was the appropriate and ultimate end of the concert.

After that the jury evaluated the performances with all the bands and picked one to participate in the Saxon finals in Leipzig. Two further bands were chosen by the audience. Being the local heroes, the bands from Dresden had a clear advantage. Some teachers, students, friends and parents had come to loudly support “Achtsam” but they didn’t make it into the final round. It was still a great gig; keep it up!

If you want to see the school band live, the next opportunity is at the benefit concert. Listen to Achtsam! http://hoertachtsam.wixsite.com/official-website